Although spanning just several hundred kilometers from coast to coast, Sri Lanka is replete with a kaleidoscope of climatic zones and habitats. With distinct wet and dry zones, brought about by the island’s equatorial position and influencing weather systems springing from the Bay of Bengal; a 1,340km coastline; countless riverine habitats; montane cloud forests and evergreen rainforests; and parched stretches of xerophytic country, the island provides multiple habitat niches for a stunning collection of fauna and flora.

With such a platterful on offer, mapping out your trail through the island’s wildlife offering may seem daunting but we have compiled a quick summary of the areas in Sri Lanka that are not to be missed if you’re a fan of the wilderness.

Our trail starts three hours north of Colombo where, incidentally, on the coppery sands of a beach, the two-thousand-year saga of the island’s storied history also begins. As Prince Vijaya set foot on the island he called “Thambapanni” the sight that met his awed eyes would have been a mighty forest stretching away inland as far as the eye can see, a kingdom of leopards, bears, and elephants. Wilpattu National Park, as it is known today, named for the scattered villus (lakes), is Sri Lanka’s oldest and largest national park and one of the best destinations in Sri Lanka to spot leopards. 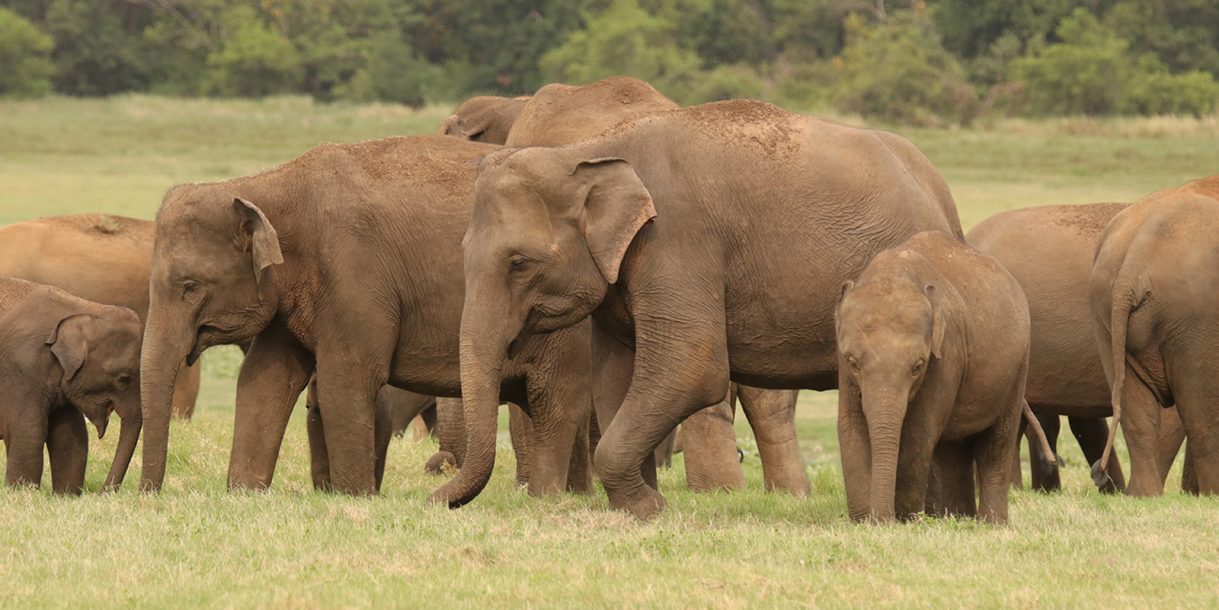 Further inland, an event that takes place on the grassy plains of the island’s vast man-made reservoirs has been listed as one of the greatest wildlife spectacles on Earth. During the drier months, the receding reservoir waters expose lush grass, attracting vast herds of elephants from miles around. Dubbed “The Gathering” it is considered the largest gathering of Asian elephants anywhere in the world where herds, isolated for much of the year, meet and mingle. On your search for Sri Lanka’s wilderness, it is an event not to be missed.

Following the trail further, we come to the verdant mountains that dominate the landscape of Sri Lanka’s central region. The cool climate and the ever-present moisture in the air cover the slopes in a blanket of greenery. The fronds hide bejeweled birds, exquisite frogs endemic to the highlands, and, on the vast plateaus of Horton Plains, majestic sambar and even an elusive highland leopard. Although the smaller denizens of the island’s jungles are often overlooked in favour of the larger, more charismatic megafauna, this section of the trail allows you to shift your focus to the fascinating world of smaller creatures.

From the hills, the trail descends back to the dry scrub and light woodland as it plunges through Yala National Park, Sri Lanka’s most popular wildlife destination. Once famous for enormous tuskers, the park has gained a reputation of late for leopards with Yala having one of the highest densities of the big cat anywhere in the world. Kumana National Park, to the east of Yala and Bundala, to its south-west, are world-renowned birding destinations, especially for wading birds and ducks during the migrant season.

Although there are yet many places to explore – we have not even touched Sinharaja, a UNESCO World Heritage Site – our trail culminates at Galle. Off its coast, in the emerald waters of the Indian Ocean, blue whales gather in the only non-migratory population in the world. Sperm whales and killer whales are often spotted in the nutrient-rich waters while pods of dolphins race alongside boats, chattering away in excited clicks, agreeing, no doubt, that Sri Lanka is home to some of the best wildlife experiences that can be had anywhere in the world.